AMD-K6-2E+ and AMD-K6-IIIE+ are the fastest Socket 7 and Super7 microprocessors ever made! 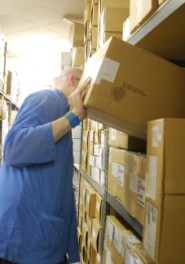 Cases and cases of AMD-K6+ microprocessors in our stock just waiting to ship to you! 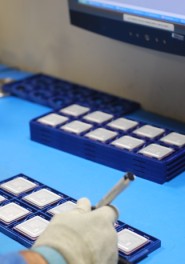 PCC may have the largest supply of brand new factory-sealed AMD-K6-2+ and K6-III+ microprocessor inventory in the world. 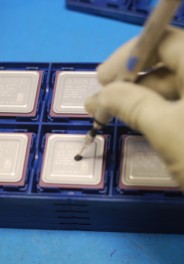 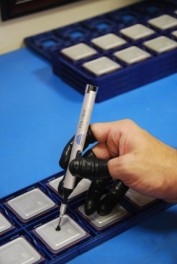 If you've been looking for a Socket 7 or Super Socket 7 microprocessor to be used in an existing circuit board without redesign then keep reading, as you'll likely find great news on this web page!

PCC has brand new AMD-K6-2+ (AMD-K6-2E+) microprocessors that are still in the original AMD factory sealed packaging. These parts were purchased directly through Authorized Distribution and were shipped from AMD's factory to our facility and we can provide the paper trail and factory C of C's to prove it. These highly sought after parts have been stored in our climate controlled warehouse (see photo at side bar) and are available to ship immediately.

The "+" in the part number is used to differentiate parts fabricated using AMD's .18-micron process, from parts built using AMD's .25 micron technology. AMD's .18 micron process allowed production of parts with clock speeds as high as 570MHz as well as the addition of an on-chip L2 cache. These enhancements significantly improved performance over previous generation AMD K6-2 and AMD-K6-2-P processor families.

AMD literature refers to these processors as "Mobile processors" because they were originally manufactured and targeted for use in notebook systems produced by Compaq, Fujitsu, HP, and NEC. They were priced competitively with Intel's Celeron offerings. The Standard version was designed to operate a 2.0 Volts and Low Power versions were designed to operate at even lower voltages. Learn more from the AMD archives.

In addition, AMD PowerNow!™ technology was introduced to enable better system battery-life, and an enhanced version of the 3DNow!™ instruction set to improve performance while running multimedia applications. Learn more from AMD archives.

AMD's pricing at its introduction was developed to compete with Intel Celeron processors, however we are slashing our prices to make room for newer parts. We include the table below for archival reasons only. Learn more from the AMD archives.

Although AMD's part numbering system can at times be deceptive, the AMD-K6-2+ and AMD-K6-III+ are actually identical with the exception of the amount of L2 cache. The AMD-K6-2+ has 128KB of on chip cache and the AMD-K6-III+ has 256KB of cache.

In summary, to use a K6-2+ (K6-2E+) in your existing design with the full benefit of the processors performance and advanced features, you will need the following:

PCC would like to liquidate its + (Plus) series of AMD microprocessors to make room for newer products. Please contact PCC directly to obtain samples or other support. No reasonable offer for production quantities will be refused.

Click for data sheet. Note that speeds above 500Mhz are undocumented by AMD in the data sheet as these microprocessors were introduced after the AMD data sheet was published.

Click here to see a list of all AMD-K6 microprocessors that PCC has in stock with up to date quantities.

Click here to view the official archived AMD Q & A documents used to provide content for this web page.